In Honor and Memory of Irving Crown
" 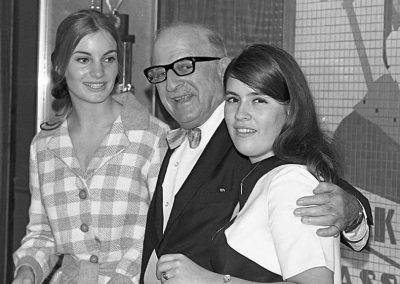 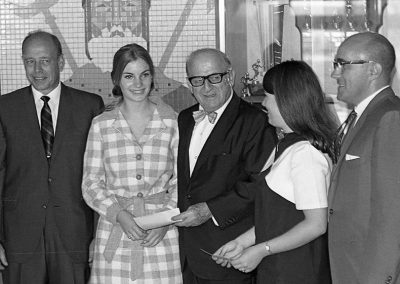 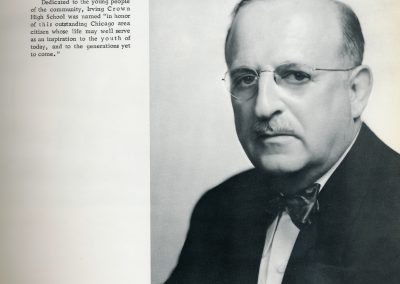 Irving Crown High School is named for the school’s benefactor and previous owner of the property on which it stands, Irving Crown

Here is some information about the person our school was named for.

Chicago Tribune March 02, 1987 Irving Crown, 92, one of the co-founders of Material Service Corp. and a former chairman of the firm, died Sunday in Columbus Hospital.

The building materials firm, which Mr. Crown helped found in 1919 with two of his brothers, Col. Henry Crown and Sol R. Crown, has been instrumental in the growth of the Chicago area, manufacturing concrete for highways, subways and buildings.

Mr. Crown was born in Chicago and grew up on the Northwest Side.  He and the two brothers started in the aggregate business as brokers and purchased plants and began making and selling building materials.

Irving Crown’s son-in-law, Charles Goodman, said Mr. Crown was “a very warm, family-minded person.  Family was the most important part of his life.  He was thorough and precise in business, but his most unique quality was his forgiving nature.   He was a wonderful human being, very charitable and very human. He and (his wife) Rose were very much in love to the end.”

Mr. Crown also was vice chairman and director of Henry Crown & Co., vice chairman of the Freeman Coal Mining Corp.   and Marblehead Lime Co. of Chicago and as a director of Lemont Shipbuilding and Repair Corp. and SCNO Barge Lines Inc., St. Louis.  Freeman and Marblehead are subsidiaries of Material Service.  Lemont Shipbuilding and SCNO Barge Lines are subsidiaries of Henry Crown & Co.  A leader in philanthropy for more than 40 years, Mr. Crown received the David Ben-Gurion Award, from the Israel Bonds drive, in 1971.

Irving Crown High School in Carpentersville, Illinois was named for its benefactor and the previous owner of the property on which is stands.

Mr. Crown and his wife of 58 years, Rose, established the Irving and Rose Crown School of Graduate Studies in American Civilization at Brandeis University in Waltham, Mass.  He served on the board of Mt. Sinai Hospital, which in 1984 dedicated the Irving and Rose Crown Surgical Pavilion; the advisory board of St. Joseph Hospital; and the board of Anshe Emet Synagogue.  He was an honorary chairman of the Jewish United Fund, which he served for more than 40 years.

Besides his wife, Mr. Crown is survived by a daughter, Suzanne Goodman

Starting in 1938, the company operated the Thornton Quarry, one of the world’s largest limestone quarries, in Thornton, just south of Chicago.  The company soon benefited from large war-related contracts, enabling it to acquire coal mines and more limestone quarries, and to become one of the city’s most prominent builders of commercial property.  Among the major Chicago structures that MSC helped to build were the Merchandise Mart, the Loop Railway, and the Civic Opera House.   Friendly ties to Chicago mayors Anton Cermak and Richard J. Daley allegedly boosted the firm’s fortunes.

In a stock-for-stock merger in 1959, MSC became part of the General Dynamics Corp. (GD), a leading military contractor. The Crown family obtained a major interest in GD through the deal, a move that would quickly come to haunt them, as GD’s bad financial health forced the Crowns in 1961 to sell one of their prized possessions, the Empire State Building in New York City.  The Crown family was forced to sell their interest in GD, and thus MSC, in 1965.  Within five years, however, the Crowns had re-accumulated enough General Dynamics stock to gain control of the company, including the Material Service division.

Around this time, the Crowns created Henry Crown & Co., a holding company that would eventually form the massive core of Crown family investments nationwide, including its stake in GD, major real estate and resort properties, Maytag Corp., and a 10 percent share of the New York Yankees.  By the early 1980s, Material Service had become the leading distributor and producer of building materials in the Midwest; it employed more than 3,000 people.

The Arie Crown Theater was named for the father of Irving Crown, Arie.

The Arie and Ida Crown Memorial was named in honor of the parents of Henry, Irving, Herman, and Edward Crown.   At the end of the 19th century, Arie and Ida Crown immigrated from Eastern Europe and settled in Chicago with hopes to provide a better life and opportunities for their children.

Although Arie was an itinerant peddler, he and Ida were able to offer their children a stable home that was embedded in Jewish values and traditions.  The upbringing of the Crown brothers gave them a strong foundation on which to build one of the most successful corporations in America today, Material Service Corporation.

In 1947, the Crown brothers allocated a portion of the profits from their corporation to create a foundation that would allow them to give back to the country and community that offered them the opportunity to prosper.  Today, the work of the Foundation is continued by the descendants of the Crown brothers; and focuses on various program areas in the Greater Chicago Area, as well as with members of the Jewish community locally, nationally, and internationally.

Arie was a sweatshop worker in Chicago with the birth name of Krinsky.  He and is wife Ida were Jewish immigrants from Lithuania.  Arie changed the family name to Crown while Henry was a boy.  Henry was the third of seven children.