Did you remember the Bonanza Sirloin Pit?

The History of the Bonanza Restaurants

Bonanza Steakhouse was a chain restaurant. This location took over the space that was vacated by Harvest House. This restaurant opened in 1970. In the early 1970’s, the chain was renamed Bonanza Restaurant. Bonanza closed in 1976.

In the 1980’s, they opened a location outside Springhill Mall, near Floyd’s Restaurant. This space had once been a Ponderosa Steakhouse. Interesting to note is: Bonanza and Ponderosa became part of the same company when there was a merger 1997.

In case you were wondering – Bonanza was started by an actor who starred on the television show of the same name. Dan Blocker played Eric “Hoss” Cartwright. In 1963, Hoss opened Bonanza Sirloin Pit. The location was in Westport, Connecticut. Based on his fame (probably), this grew into a chain that he owned until 1966. This is when he sold the chain to the Wyly Brothers. 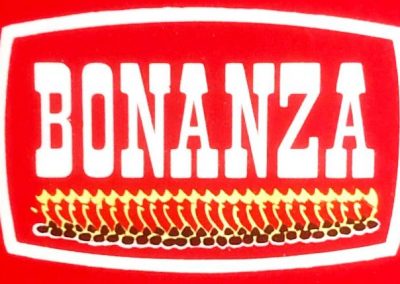