Did you remember the Dante’s Inferno?

Dante’s opened in late Dec 1972 or early 1973. They were located at 322 River Street in East Dundee. The dining room had a medieval theme. The lounge had an inferno theme (as in the book of the same name as the restaurant). It was an Italian restaurant and they were known for their pan pizza. A restaurant critic’s review mentioned the pan pizza and their Dante burger for your entrée. The review also included two salads and cannoli for dessert.

A few months after opening, Dante’s Inferno became an actual inferno in 1973. Fire gutted the whole place and damaged several businesses nearby. By Christmas, all businesses were either reopened or in process of rebuilding.

The exception was Dante’s. They were neglecting clean up (in November) to remove the remains. The village was about to get involved. In December, they were still awaiting insurance adjustment. The end result is that Dante’s Inferno’s anticipated reopening never happened. 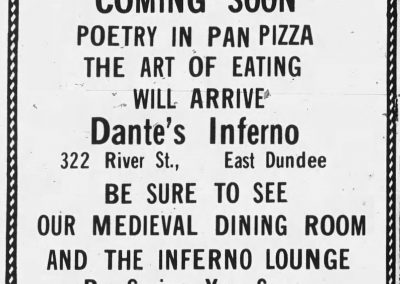