Welcome to the Carpentersville Memories Fisherman’s Dude Ranch Page. Our goal is to bring back some fun memories of growing up in the 1950s, 1960s, 1970s and 1980s. Please take your time and check out all of the Dude Ranch images and files, they are sure to bring back many memories.

The History of Fisherman’s Dude Ranch

It’s hidden behind maple saplings and overgrown vines now, but look closely in the brush on the south side of Golf Road just east of I-294 and you will indeed see a giant rainbow trout leaping into the air. Look a little further back, and you’ll see the fisherman waiting to bring in his catch.
The business the sign advertised was Fishermen’s Dude Ranch, the brainchild of a man named John Reding Sr., who was originally in the sand and gravel business. When they had a pit leftover from mining sand in Des Plaines, Reding decided to fill the pit with water, creating a lake and several ponds to stock with fish that people could catch for a fee. He called it Fishermen’s Dude Ranch after he was inspired by his secretary’s vacation at a dude ranch out west.

Reding decked the property out like an old-time country fishing hole and opened for business in 1956. The next year Reding bought a farm in Missouri to supply trout, the most popular fish, and he contracted out for other fish, like bass, catfish, and northern pike — all this to supply the 16-acre lake and two half acre ponds with enough fish that a catch was almost a certainty. The giant fiberglass trout and fisherman were added to reel in passers-by in 1965. A motor underneath the sign moved the fish back and forth so it looked like the fisherman was hauling it in.

The lake was open for fishing year-round. There was a comfy lodge with a fireplace for fishermen to warm up after a day of ice fishing when the ice was thick enough, and even fish-themed miniature golf courses for the kids.

In the ‘90s, just $2 would get you in the gates, and for another $1.25 you could bring the kids. Fisherman kept and paid for their catches by the pound. According to a Chicago Tribune article, on a nice day the Dude Ranch routinely attracted more than 1,000 fishermen.

John Reding Sr. passed away in 1971, but his wife Mary Anne and son John Jr. kept the dude ranch going.  After Mary Anne died in 1994, John Jr. maintained operations for a few years, but in 1999 he closed Fishermen’s Dude Ranch and sold the property to developers.

But the Redings’ memory lives on in the area – they lived directly across Golf Road from the ranch. The street where they lived is named Reding Circle to honor John Reding Sr., and Lake Mary Anne, which Reding Circle embraces, is named for his wife.

As for the giant trout sign — we spoke to the current owner of the site. He said that right now there’s no preservation plan for the sign, but the land is currently for sale! So if you’ve got the money, you could catch yourself a fiberglass fish that would look great over the mantel. 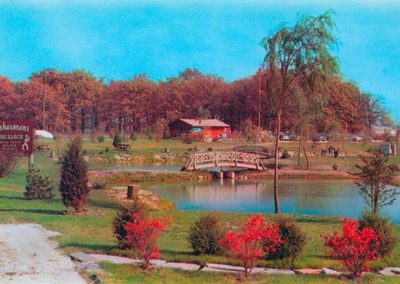 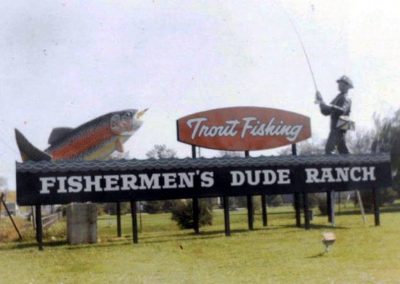