In Honor and Memory of Ken Miller 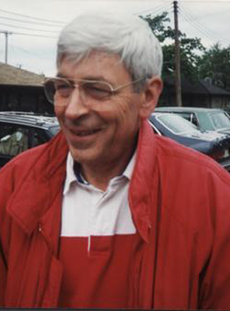 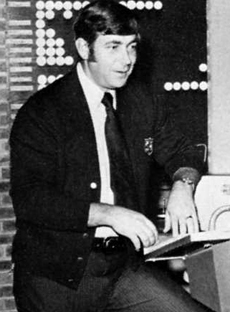 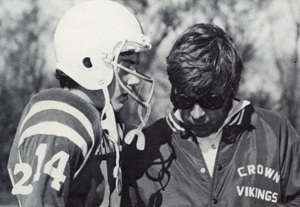 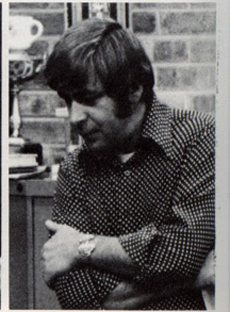 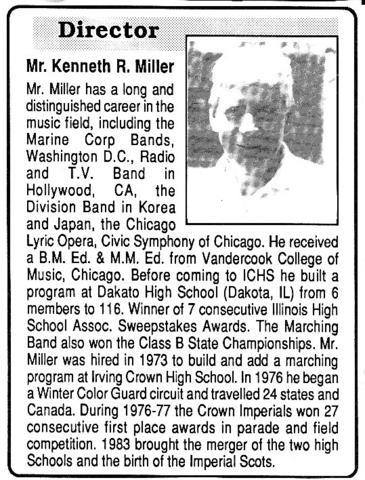 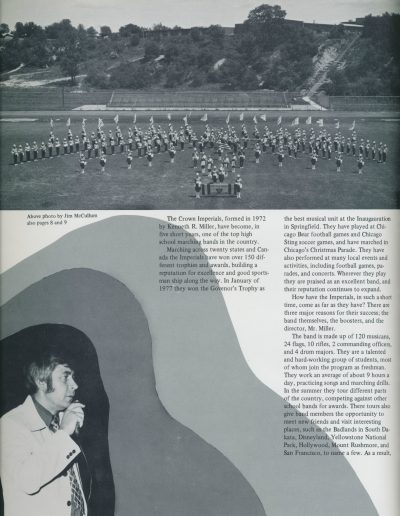 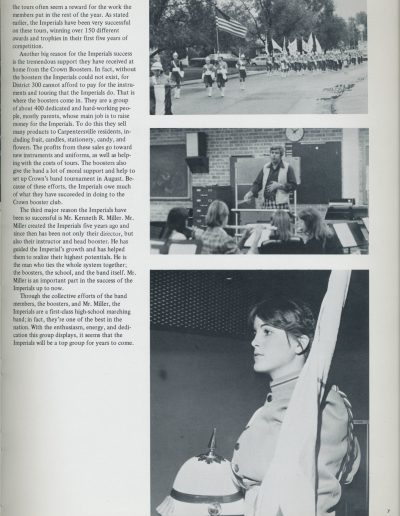 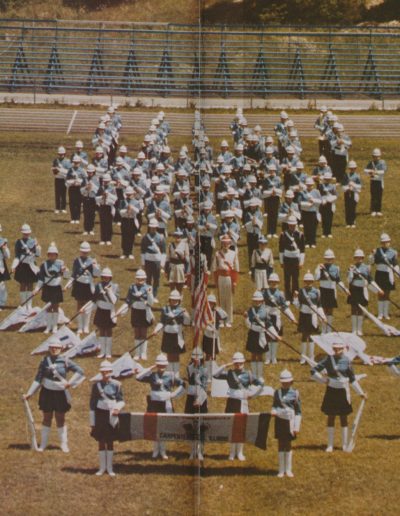 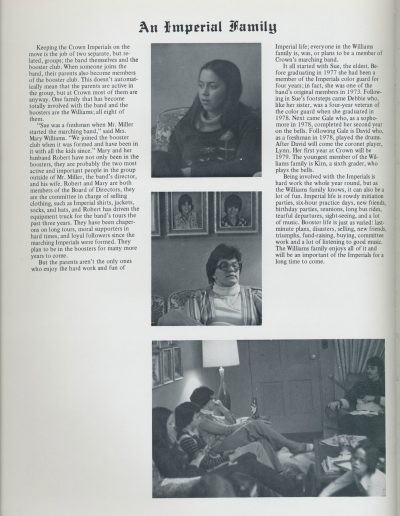 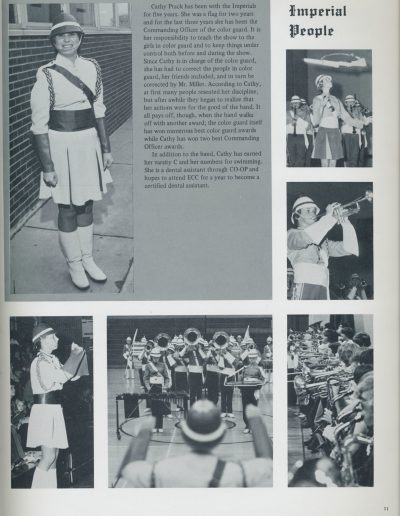 Mr. Miller had a long and distinguished career in the music field, including the Marine Corp Bands, Washington D.C., Radio and T.V. Band in Hollywood, CA, the Division Band in Korea and Japan, the Chicago Lyric Opera, and the Civic Symphony of Chicago among others.  He received a B.M. Ed. & M.M. Ed. from Vandercook College of Music, Chicago.

Before coming to ICHS he built a program at Dakota High School (Dakota, IL.) from 6 to 116 band members.  Winner of 7 consecutive Illinois High School Assoc. Sweepstakes Awards.  The Marching Band also won the Class B State Championships. Mr. Miller was hired in 1973 to build and add a marching program at Irving Crown High School.

In 1976 he began a Winter Color Guard circuit and traveled to 24 states and Canada. During 1976-77 the Crown Imperials won 27 consecutive first place awards in parade and field competition.

1983 brought the merger of the two high schools and the birth of the Imperial Scots.

Ken is survived by his wife of 41 years, Joy; son, Kyle R.; and daughter, Allison J. Moderson, both of Henderson, Nevada.

Many people have wonderful memories of Mr. Miller and I would be happy to post them here.

I have several memories that come to mind:

I met Mr. Miller way back in early 1975 when my sister Wendy joined the Imperials, then my sister Linda in 1976.   I would attend rehearsals for the band and winter guard to watch and learn.   I remember Steve Suslik even trusted me to run the tape recorder at guard practice.  I remember the commanding presence Mr. Miller had, but to me, he was like a father figure.  An occasional pat on the head, and a “How’s Carl, today.”

I forget exactly when it was but, one afternoon during a rehearsal break Kyle and I were running around.   He got us in Irving and took us to a bank at Meadowdale to get an autographed picture of OJ Simpson.   You should have seen our faces, like kids in a candy store.  Ok, nowadays, it wouldn’t be such a good thing, but OJ was a different guy back then.

Mr. Miller also played an important role in my life academically and musically.  When I first joined the band and high school I was afraid of my own shadow.  He taught me how to step out of my comfort zone and really push myself.  That lesson has stuck with me all these years.

I first met Mr. Miller in the band room at Perry Middle School, it was the summer of 1974.   He was spreading the word of his dream to form a competitive marching band… that traveled!   For an eighth grade kid who had never left Illinois, this was very appealing!

And so I began my journey with Mr. Miller …. a journey that not only allowed me to travel, but also allowed me the opportunity to understand that with hard work and dedication brings success.   Mr. Miller was my Band Director, and Football Coach from 1975 – 1978.   Mr Miller was a man who I looked up to and still to this day admire.

I know, in my heart that Mr. Miller is now in heaven teaching some young boy or girl about music, and what you can accomplish when you are willing to work hard for your dream.

May God bless you and your family Mr. Miller!

What a great man, so dedicated, so much energy and enthusiasm (yes and sometimes anger!).   But there was never any doubt that he cared.  I remember his sayings -like “Cleanliness is next to Godliness”, and “put the em-PHA-sis on the right sy-LA-ble”.

My thoughts and prayers are also with his family, thank you all for letting us have so much of him for those many years.

Mr. Miller was an influential person in my life.  He kept me connected as a teen who most likely would have taken a turn for the worst in those high school years.  Although, I haven’t been around or come around the Crown Imperials or the Miller family… I have watched from afar.

The band and this family are very much a part of who I have become today.  I share my story with others when ever I get the chance.   Mr. Miller taught us how to win with class, and to accept loss with class…   to never quit until it’s over… and to always do our best–even if it isnt the best that others think WE should BE…   These are just some of the values I passed on from those years that I have taught my two hockey playing boys.

I had just moved back from Wisconsin in 1974 and was living with the DiSimoni family.  One of the main reasons I moved back to Carpentersville was the Imperials. In 72 and 73 we didn’t have a band like that, and they were going on tour too.

Somehow the DiSimoni’s talked Mr. Miller into letting me go on the trip although I wasn’t officially registered at Crown again.  That was a funny time because I remember kids could buy and smoke cigarettes on the trip if they had a note from their parents.

We went from Niagra Falls to Youngstown, Ohio and actually got to stay in a hotel rather than some high school gym floor.   When we got to our hotel room at the Holiday Inn in Youngstown our room was just above the entrance to the hotel with a huge window, did I say right above the entrance.  A few kids in the room were saying that we should moon people coming into the hotel, they dared me to…

Next thing I know Mr. Miller is at that door.  I was honest and took the blame for what the hotel customers saw while entering the hotel.  Mr. Miller could have sent me home right then but instead he said; “Son, I didn’t bring you on this trip for that kind of nonsense.  Let’s see that it never happens again”.  That was it, he didn’t get too bent out of shape or anything, probably had a laugh over it himself.

The next day was the Hall of Fame parade in Canton, Ohio.  Many people ended up in the medic tent that day.   I don’t know how hot it was but people would fall out right in front of you marching down the street, heat stroke.

I already had a lot of respect for Mr. Miller, but from that tour on I had even more respect for him, he was definitely one of a kind.  And I was on the receiving end of the baton throwing a few times that Royden mentioned above.   He loved to pick on the drum line.   Thank God Mike Filip was there to protect us all.