Welcome to the Carpentersville Memories Lake Marian Page. Our goal is to bring back some fun memories of growing up in the 50’s, 60’s, 70’s and 80’s. Please take your time and check out all of the Lake Marian images and files, they are sure to bring back many memories.

Do you remember Lake Marian?

At the time many families were moving from Chicago to Meadowdale as it was primarily for veterans.  Lake Marian was a smaller **unincorporated** community, with an 11 acre lake and was considered part of Dundee.  There were 460 platted lots for sale.  A number of people bought there as an investment for potential summer homes.  During the 1950’s, we only had 5 homes on the upper end of Pheasant Trail and I am guessing no more than 40-50 homes total.

In late 1955, early 1956 the Schneider family bought 2 adjoining lots on Indian Lane with each lot costing $1200.  My dad was a teacher at Dundee High and during the summers the teachers helped each other building their homes.  With the help of some of the teachers, he built our house in the spring and summer and we moved in September 1956.  The construction cost was just over $12,000.

The Preis family paid $1,000 for their lot and the house cost $9,700. They eventually bought the lot next to them and it was later purchased by Habitat. I actually was able to help with painting and drywalling the home.

The subdivision formed the LMPOA (Lake Marian Property Owners Association).  In the early years, there were more than a few problems with the community well system that the subdivision depended on that was owned by Bill Hart, who was also the developer of Lake Marian.  During periods of no water, I remember going to get water at a natural spring on County Line Road, towards Barrington.

Summer always meant spending your days at the lake, most days, all day, going home for meals and going back to swim until dusk.  Most of us couldn’t wait until we were old enough to go without a parent.  Even with that, we all knew there would be someone’s parent there and they had full authority to discipline any of the neighborhood kids or even send us home if they deemed necessary.  Most likely your parents would know about anything that you were involved in, before or shortly after you got home, then it was double trouble.  There were also times that Fire Rescue was called because there was someone unaccounted for.  Although it was a spring fed lake, the water was murky with a muddy bottom that made it impossible to see underwater.

Random memories of growing up in Lake Marian:

We played everywhere within the neighborhood and always went home when the Petersen’s (at the top of the hill) rang the bell.

The ravine on Pheasant Trail had a Tarzan swing.  The boys played war in those woods.

Building forts in the ditches (complete with fire LOL)

Building forts with the hay bales.  A farmer used to come and cut the many empty lots and leave the bales for a couple weeks, which left time for creative play.

Sunbathing, swim lessons and the raft.  The boys liked to play “King of the Raft” which meant the weaker of the kids on the raft were given the option; jump or get tossed into the water.  Looking back, it could be pretty brutal at times.

Digging a big hole in the Leveen’s backyard- swimming pool complete with a slide!

Baby Jesus was blown up in the manger

“Old man Edwards” chasing us thru the fields

Picking wild black raspberries across from the Voss’s and coming home with arms and legs all scratched from the thorny bushes.

Sledding down Memory Lane from Sunset.  Greg Parks sledded into the tailpipe of a car parked on the side of the road ending in a trip to the ER for him for stitches.

Sledding down the hill behind my house on Indian Lane across Memory Lane and seeing how close you could get to the creek without going in.

The Ziegler’s had the coolest designed home

Running down “the path” to Oak Ridge….hundreds of grasshoppers attacking!

Trudging back and forth to Oak Ridge in the winter snow on “the path” to get home for lunch and back to school. It sure didn’t feel like a shortcut in the winter.

Ice Skating on the lake.  Small lagoon was for skating…also had a cleared area for hockey.  No warming house, no shelter.  We skated until our feet were frozen and then had to walk home. Fire barrel and hot cocoa.

The Moehlings bought an old school bus and converted it to a camper in the early 60’s.  We spent quite a few summer nights sleeping out and being too loud too late prompting Mrs.Moehling to come out and tell us to go to sleep. The bus had a name..Blue something???

We had a whiffleball field in the empty lot next to our house on Indian Lane.  The boys from the neighborhood used to come to play and pick teams; the Kriegers, the Petersens, the Zeehs, the Cohills. This was before the baseball field was built on Park and Old Farm.

Mr. Petersen making the kids in the neighborhood stilts from conduit and pieces of 2X4, slingshots from old inner tubes and molded lead soldiers.

Sleeping out on lawn chairs in the front yard.

Click on any of the images below to open the image viewer. 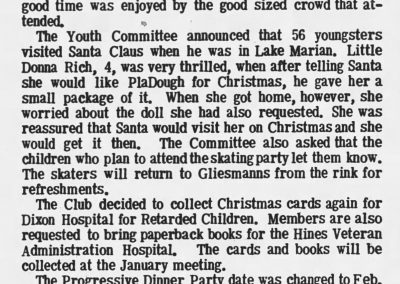 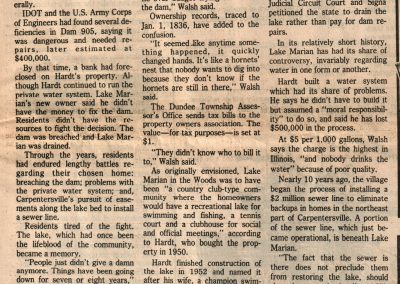 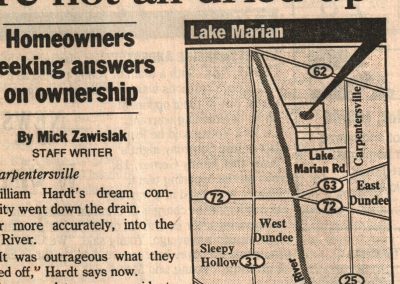 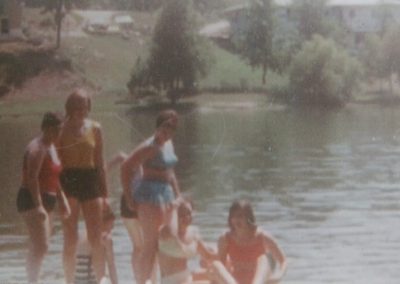 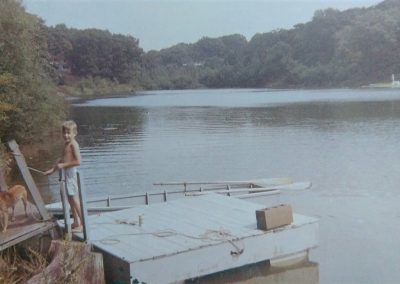 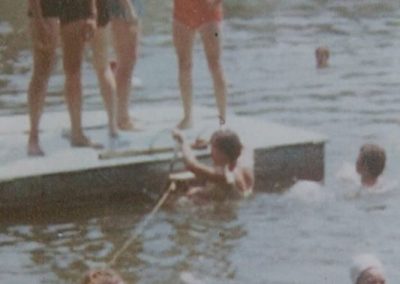 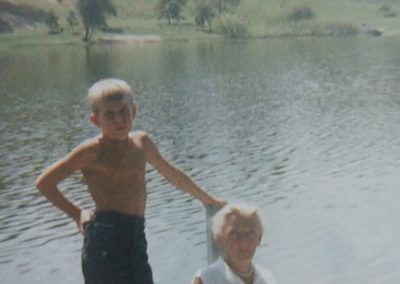 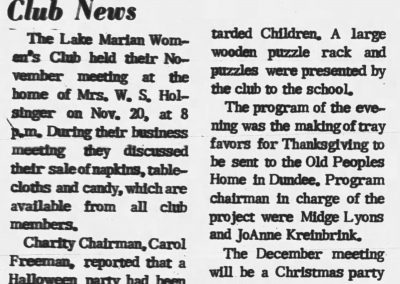 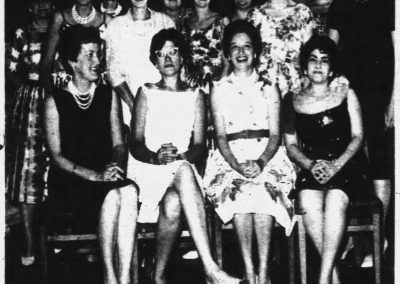 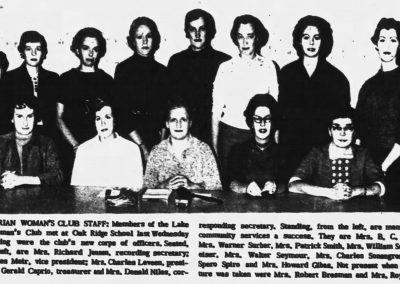