In Honor and Memory of Pat Wojciechowski 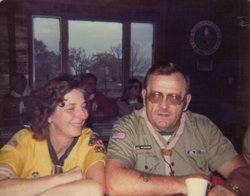 Patricia T. “Pat” Wojciechowski (nee Rickert) age 75 of Rapid City, SD was reunited with her loving husband Stan Sr. in heaven, who was her one and only true love.

She was a Den Mother in Pack 37 and a Asst. Scoutmaster of Troop 37.  She was one of the first women in the U.S.A. to earn her Wood Badge Beads in Scouting.  She spent countless hours beside her Husband Stan and kids working with the Boy Scouts.