Welcome to the Carpentersville Memories Spindle Page. Our goal is to bring back some fun memories of growing up in the 50’s, 60’s, 70’s and 80’s. Please take your time and check out all of the Spindle images and files, they are sure to bring back many memories.

Do you remember The Spindle?

Berwyn’s Cermak Plaza Shopping Center featured a piece of public art like no other: eight cars impaled on a 40-foot-tall spike in the center of its spacious parking lot. Named “Spindle,” the car kabob went up in 1989, skewered by Los Angeles artist Dustin Shuler, and had a cameo appearance in the film Wayne’s World.

Spindle beckoned generations of video-shooting visitors, who yielded to the irresistible urge to drive doughnuts around it. But time and the elements took their toll on the eight skewered junkyard cars, leaving them battered and rusted by Chicago-land weather and caked with pigeon poop.

Cermak Plaza wanted to tear down Spindle so that it could build a Walgreen’s with a drive-thru. Proposals were floated to move the sculpture to another spot in the parking lot, or to build a new Spindle elsewhere. Multiple deadlines passed, yet Spindle still stood.

But not forever. Spindle was finally demolished on May 2, 2008, after a failed attempt to sell it on eBay. The top two cars, the VW Beetle and the BMW, were lifted off the spike (for possible future display), then the rest of the sculpture was toppled with a backhoe. 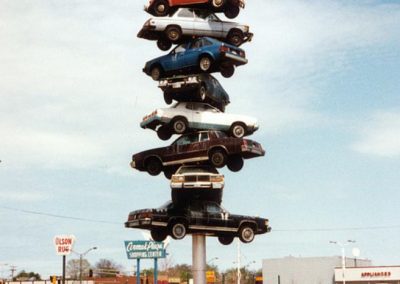 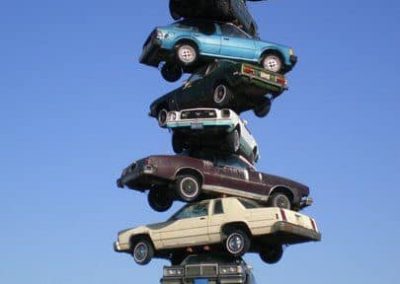 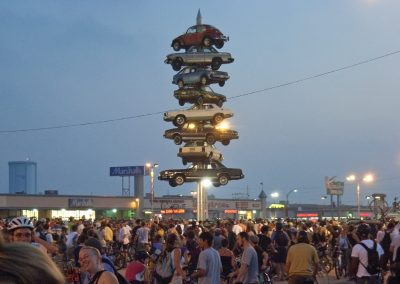 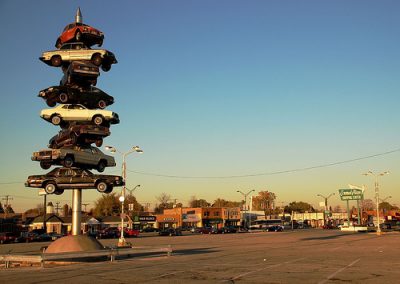 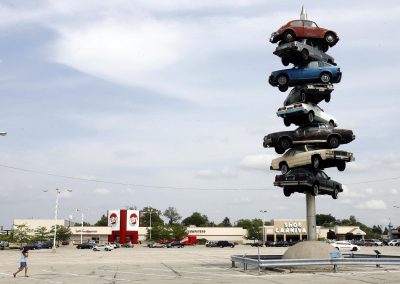