Welcome to the Carpentersville Memories WMAQ Page. Our goal is to bring back some fun memories of growing up in the 50s, 60s, 70s and 80s.

Did WMAQ Make You Rich?

The radio station started in 1923. The frequency was shared with WQJ. WQJ was bought out in 1925. This gave sole broadcasting rights to WMAQ.  One of the most popular and famous marketing schemes of the past was the “WMAQ Is Going to Make Me Rich” campaign.

Major broadcast events included the 1924 Democratic and Republican national conventions.  That same year the station aired the World Series and became home to the Chicago Cubs. Amos ‘n’ Andy also aired on this station at one time.

Over the years, there have been numerous formats. They include music and talk radio. A well-known slogan was You Give Us 22 Minutes, We’ll Give You The World. This slogan was used by all the stations owned by Group W. The station call letters were changed when Viacom had a merger that required the change. Although the radio and tv stations have been known to have different owners, they were known to both be located in the same building, at times. This includes both being located at the Merchandise Mart at one time.

The television station is owned by NBC. The tv station started using the call letters WMAQ in 1964. The acronym came from the sister station’s motto – We Must Ask Questions.

The station ran infomercials. This ended in 1992. This was a call made by NBC. Due to an outcry by a Christian group, Jerry Springer was taken off the air. Another station altering event was a potential fine by the FCC because of poor “commercial-during-children’s-program” records. Over the years, there have been other controversies.

WMAQ is and was known for their news. There are several well known programs that aired on Channel 5. These include Third Rock from the Sun, The A-Team, Adam-12, Cheers, ALF, etcetera. Some of the current running programs are Blacklist, Chicago (Fire, PD, Med), and This Is Us, to name a few. 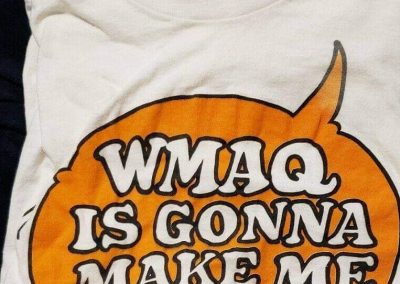 WMAQ Is Gonna Make Me Rich